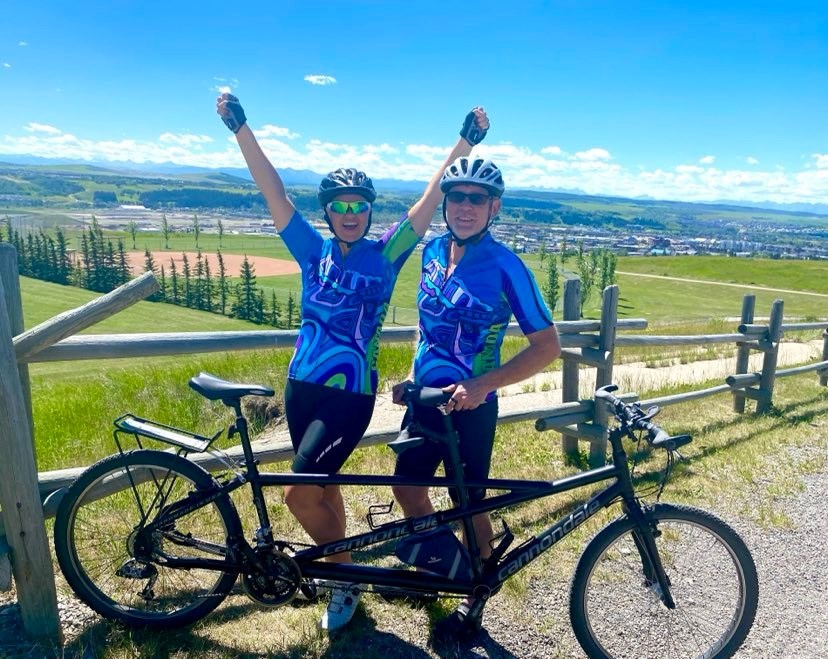 It’s a mobile publishing house, movie, TV series, inspirational cross-country tandem bike trip, charity fundraiser, and a love story – and it’s coming to a community near you. That is, as long as you live in Canada.

That is, as long as you live in Canada.

JB Owen and Peter Giesin left from Vancouver July 1 to cycle 10,000 kilometres on their tandem bike from Vancouver, B.C. to St. John’s, N.L., with multiple goals in mind, not the least of which is to help make a better world for every human on the planet.

On July 19, while their van driver got re-acquainted with family from Cochrane and they waited for repairs at Bike Bros. on River Avenue, Giesin related the story of how he and Owen met through a Facebook post when he was looking for a roommate.

They started out as roommates and when their kids went to spend time with their other parents, the relationship blossomed. Owen is from Red Deer, Giesin from New Jersey, and their mutual love of travel eventually led to a wedding in Estonia.

Now they’re off on another journey of discovery.

“Riding a tandem bike really is a great relationship-builder,” Giesin said with a smile.

A smile accompanies much of the conversation with the upbeat pair.

They have established a publishing house, focused on people finding their “ignite moment.”

Giesen said most if not all people have had a moment in their lives that could be described as a sort of crossroads, where they reached a significant realization of what they want in life, or were inspired in some way to see possibilities. They are what Owen and Giesin call the “ignite moments.”

Their aim is to help aspiring writers publish their stories, which also will inspire others. So far they’ve published 18 international bestsellers by 35 authors.

“It’s about igniting humanity to what’s possible,” he said.

Giesin said their latest book is called Ignite Your Wisdom.

“Everybody has a moment where something you’ve done, gained you wisdom,” Giesin said.

The idea for cross-country biking was hatched as the couple was in the throes of COVID cabin fever.

Owen said it was two years ago, on her 50th birthday, when people were asking what they were allowed to do, that she started asking herself what she could do that would be big and exciting.

“I wanted to go forward and be more innovative, more creative, more connected,” she said.

That ultimately led to a Red Deer to Ottawa bike trip in 2020, which became the precursor to a trip from Red Deer to the Yukon in 2021, and now to this summer’s cross-country trip.

They also are raising money for the Ignite Possibilities School of Hope, to fund the building of a school in Indonesia for rural and impoverished students, providing them with the literacy and education they deserve and the tools to lift their community out of poverty.

Their documentary about meeting people and how to ignite humanity, will include the Dalai Lama.

The documentary will feature individuals sharing their ignite moments, as well as their perseverance, tenacity, and strength.

They also will be launching a book and TV series called Wisdom From The Back Of A Bike.

The goal for the book, which will be a compilation of the stories of the people they meet, is to make it the largest compilation book ever made.

Owen agreed that a tandem bike is a solid relationship-builder.

“Yes. We sometimes feel we should do couples workshops,” she said with a laugh.

Owen said her partner does have to put up with her singing sometimes. Late in the afternoon, she said she’ll break into song about what they’re going to have for dinner that evening.

“We meet the most amazing people. People come to the door with fish they’ve caught,” she said. “Human nature is so special.”

A birdhouse maker in Dry Gulch, B.C. left an impression on them, along with a gift of a fairy house. It’s similar to a birdhouse but with no entry big enough for any bird.

Owen said she’s convinced there are fairies in there.