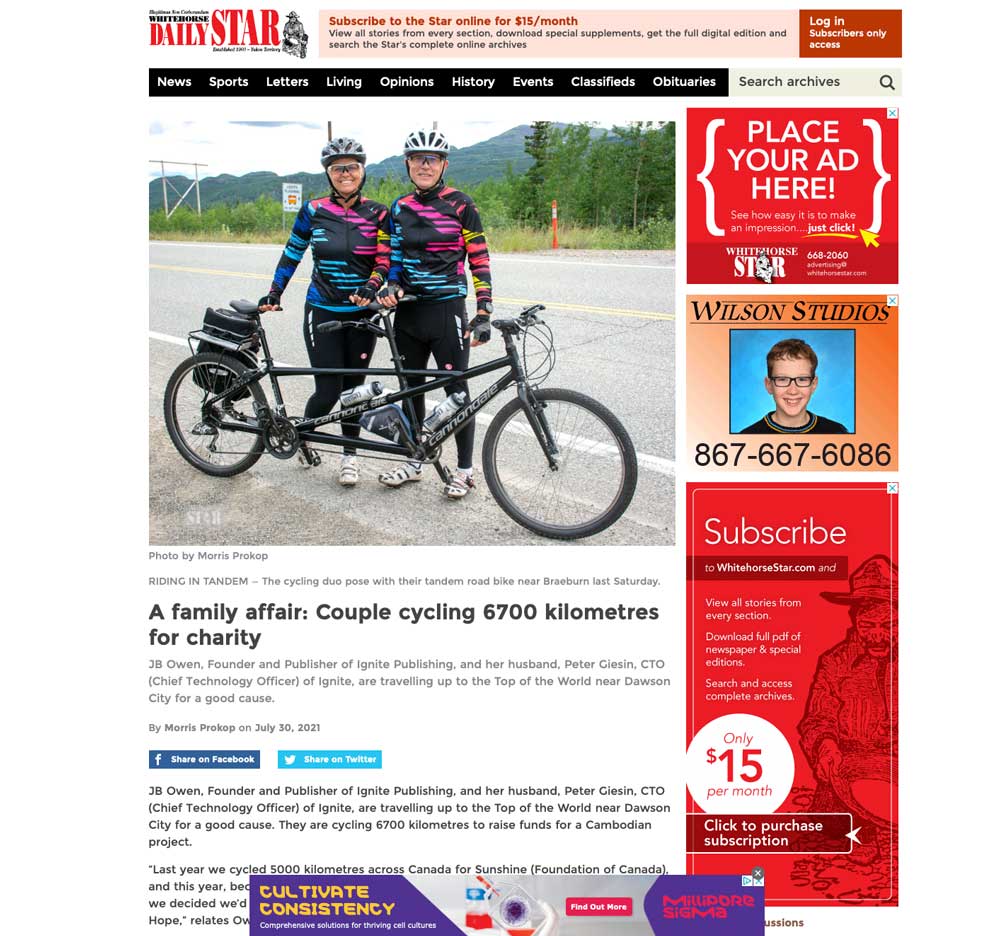 JB Owen, Founder and Publisher of Ignite Publishing, and her husband, Peter Giesin, CTO (Chief Technology Officer) of Ignite, are travelling up to the Top of the World near Dawson City for a good cause. They are cycling 6700 kilometres to raise funds for a Cambodian project.

“Last year we cycled 5000 kilometres across Canada for Sunshine (Foundation of Canada), and this year, because of COVID, and we couldn’t travel, we thought we’d go north, and so we decided we’d travel to the Top of the World, and raise money for the Classroom of Hope,” relates Owen.

The couple have four children between the two of them. Their two teenage daughters, Lydia Sacallis, 13, and Jorja Geisin, 16, are accompanying them on their latest journey.

“They come along with us. They are in our support vehicle. They do all of our sort of mapping out and they find the sites to see, and they help with the cooking and the food, and … they’re always cheering us on through the window and they’re really a great part of the team,” says Owen.

The Red Deer couple started their journey on June 27 and plan to be done on August 28.

“So last year when COVID started, I really felt like people were waiting to hear what they could do,” says Owen.

What can we go out and do? How can we fulfill our lives?’

“And so I just turned 50, when … this idea came up, and I thought ‘I want to cycle across Canada and show people that it’s possible.’ So I gained quite a bit of weight with COVID, and I just had my 50th birthday… I’d never been an athlete, I’d never cycled before, and I decided I really wanted to do something to show people you can just get up and do it.

“And so the same with this trip … this whole year we haven’t been allowed to travel, and again, we just wanted to show people that Canada is a beautiful place to visit. Instead of pining for where we can’t go, figure out what we can do, what can we make possible, so we thought we’d cycle to the Top of the World – what an incredible accomplishment. So we’re building an Ignite Possibility School of Hope in Cambodia for kids, because again, we feel that every child deserves to believe in what is possible for them and our whole vision is how do we ignite possibilities in people? How do we show people that at 50 years old you can cycle across the country? How do we show people that you can just get up one day and go after a dream and do something that you never thought was possible? But you just make the effort and it becomes possible.

“It’s fascinating when you just step into it and you put one pedal in front of the other, things just open up, and … just like meeting beautiful people here in Whitehorse. Things just happen serendipitously.”

Owen says 50 was a motivating age for her. “Yeah it was. For a lot of people 50, you want to … go to the Great Wall of China, or skydive, or do something really big, and I thought ‘well what can I do that I’d never done before. I’d never cycled, I’d never been an athlete,’ and this was just like a big dream, to cycle across Canada. And now we’re really bit by the bug of cycling, and so now cycling to the Top of the World … going to the Yukon, was like a big dream too. So it’s been unfolding and unfolding every year.”

According to Owen, the couple are having the time of their lives on their cycling trek.

“The trip has been fantastic. First of all, Canadians are just so generous. They’re so giving. They’re so helpful. We have just met so many people that have just helped us on our next part of the journey, given us suggestions, taken us fishing, given us ideas, and we’ve just had a fantastic trip.

“And I would honestly say, like, coming to the Yukon, you have a perception of what it’s gonna be like, and it’s exceeded all that. It’s been beautiful, it’s been gorgeous, the people have been super-friendly, we’ve had several encounters. We’ve seen seven or eight bears on the side of the road, we had a beautiful experience. We got to run with the buffalo. They were all in the ditch. There was about 60 of them in the ditch, and our bike came down the hill and got them all perked up, and they all started running with us as we were cycling, and they were just charging down through the ditch. It was incredible! I was feeling like ‘who gets to run with the buffalo?’ We just had great food, and great hospitality, and it’s just completely inspired us of how beautiful Canadians are.

Geisin adds, “We get caught up in our daily activities and we forget what or whom is in our own backyard. Just now we are out exploring our own back yard, and it’s all of Canada. And it is just so beautiful. Every day we have met a new person that has been so kind and so friendly, and so inspiring. A couple from here, from Whitehorse, that we met down in Lake Atlin, took us out on their boat, took us fishing, they caught six fish, and then they filleted it right there and gave us that. So that night we had fresh fish for dinner.

“It’s just such a beautiful journey, and the people here in Whitehorse have just been amazing. Everyone we met has just been outstanding.”

“We broke a chain on our bike in Dawson Creek, and they just fixed it for us and didn’t charge us. People have just been so generous,” added Owen.

Owen explains the concept behind the Classroom of Hope.

“Cambodia is where their initiative is, and there’s so many children there who live in rural areas that have absolutely no access to education whatsoever. And again, I just feel that, being a parent of four, that it’s so imperative that children have access to what’s possible for their future, and knowing that I could be influential in building a school, that could be for generations to come, was just an absolute yes.

Giesin adds, “As an empowerment publishing house, our vision is to impact a billion lives through a billion words, and what better way to do that through a school for underprivileged children. Just to give them that opportunity to read. Like the literacy centre here, just giving away free books, how beautiful is that just to give away words? It’s inspiration.”

The end goal of their journey is to raise $35,000, which would be equal to 35,000 bricks towards the construction of the school. They have paired their fundraising with downloads from their latest publications.

As for some of the memorable experiences they’ve had along the way, there’s been a few.

“Fishing with some local people was really beautiful,” says Owen.

“Just a beautiful lake, and then just spontaneously … we’re going into the lake,” relates Geisin. “And it’s just such beautiful clear crystal waters that you don’t find no place else. Swimming along the road at this beautiful lake. I’ll never forget it.”

“And we did a bit of rock climbing through a canyon – that was really beautiful,” says Owen. “And then Peter jumped in the water, it was freezing cold, glacier water. We’ve just been like living in the moment, just really diving into the moment and taking those experiences.

Geisin adds, “The trip to Fort Nelson – I guess it’s not Yukon, but part of it into Yukon, and into Watson Lake, we had six days of no cell service whatsoever. So to be able to unplug for six full days in this world, is unheard of! But it was so precious. The girls got nothing, we got nothing, it was just connection as a family.

So where do they go from here? Owen explains.

“So we’ll go to the Top of the World, and we’re super excited, because that’s kind of the pinnacle for us, we will cycle all the way down to Kelowna – we’re gonna renew our wedding vows in Kelowna, and then we cycle all the way to the U.S. border, and across through Frank Slide, back into Alberta.”

And what about when it’s all over?

“We have a TV series that we’re creating called Ignite Possibilities, and so we’re doing a 12-part episodic series that we’re building to show people’s other Ignite experiences and how they’re igniting things in their lives,” says Owen.

The final word also goes to Owen. “The great thing is we can create our ignite moments. We can build these wonderful powerful life-changing moments into our lives, we just have to take the effort, take the risk, take the chance, and so we’re all about inspiring people to live their ignite moments, and really enjoy them, and notice them, and recognize them.

“Our company is called Ignite, our stories are all about ignite, we’ve published over 700 stories of people’s ignite moments, and it really is to bring us together. We all have this human connection for emotion, and perseverance, and dedication, and if we can recognize that in each other, then skin colour and gender and nationality and any differences don’t matter, because we’re in this human condition together.”