From Alberta to Alaska: Charitable cyclists look to build classrooms in Cambodia 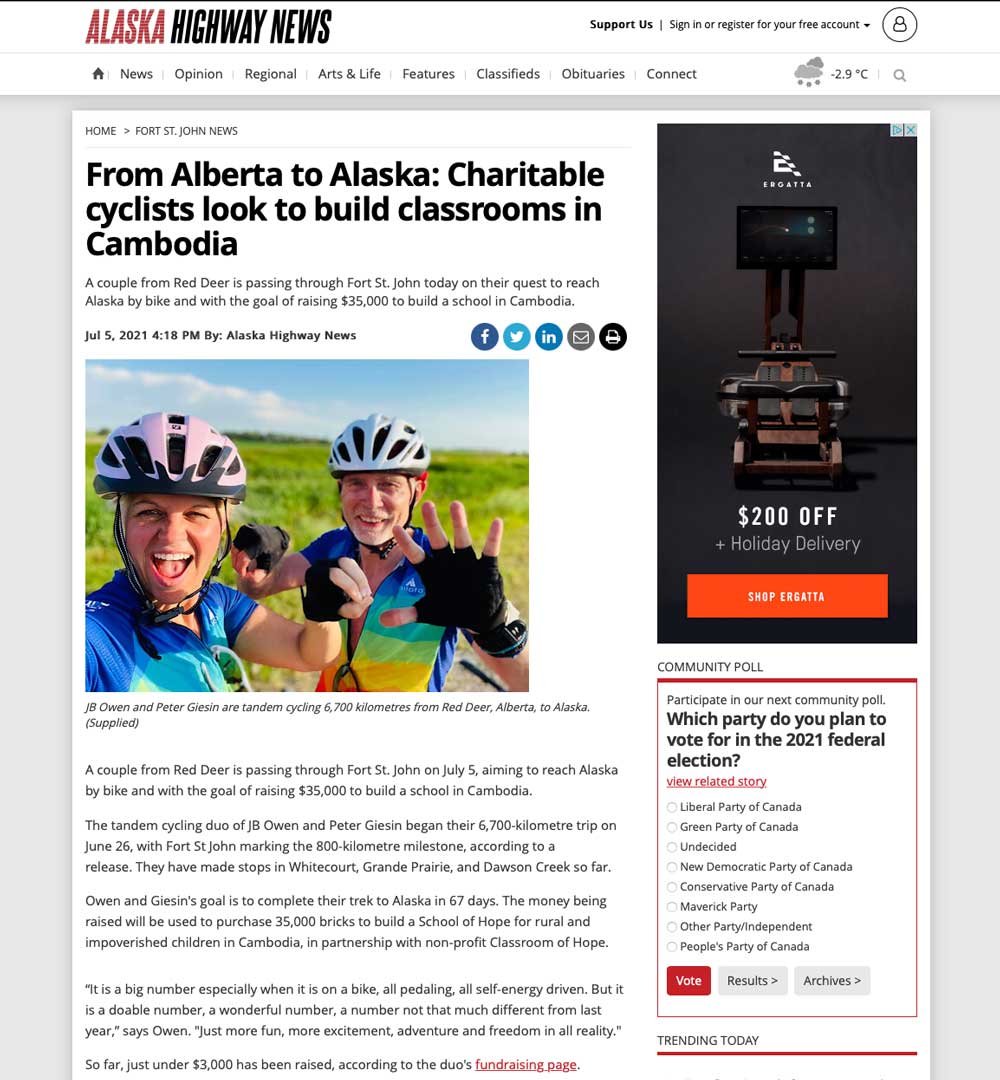 A couple from Red Deer is passing through Fort St. John on July 5, aiming to reach Alaska by bike and with the goal of raising $35,000 to build a school in Cambodia.

The tandem cycling duo of JB Owen and Peter Giesin began their 6,700-kilometre trip on June 26, with Fort St John marking the 800-kilometre milestone, according to a release. They have made stops in Whitecourt, Grande Prairie, and Dawson Creek so far.

Owen and Giesin’s goal is to complete their trek to Alaska in 67 days. The money being raised will be used to purchase 35,000 bricks to build a School of Hope for rural and impoverished children in Cambodia, in partnership with non-profit Classroom of Hope.

“It is a big number especially when it is on a bike, all pedaling, all self-energy driven. But it is a doable number, a wonderful number, a number not that much different from last year,” says Owen. “Just more fun, more excitement, adventure and freedom in all reality.”

So far, just under $3,000 has been raised, according to the duo’s fundraising page.

The pair made a pitstop in Fort Nelson on July 8 and will rest until tomorrow before moving on. Owen says they’ve been experiencing a slice of Canadiana and Northern BC hospitality, with FSJ locals fixing a broken chain on their bikes free of charge.

“It’s been phenomenal. We;re so happy to be here and have visited your city,” she said. “We’ve been enjoying the beautiful roads on our way up, we saw two black bears on our way to Fort Nelson yesterday.”

“So many lovely Canadians waving and giving us advice, sharing the way and telling us about the road. Lots of people honking as we go by, it’s great to see such Canadian spirit.”

Once in Alaska, the pair will head back down through the Top of the World Highway into B.C. and cycle home along the US border.

Last year, Owen and Giesin cycled 5,000 kilometres to support the Sunshine Foundation, a charity that helps children with severe disabilities and life-threatening illnesses.