This Female Entrepeneur Is Determined to Change the World 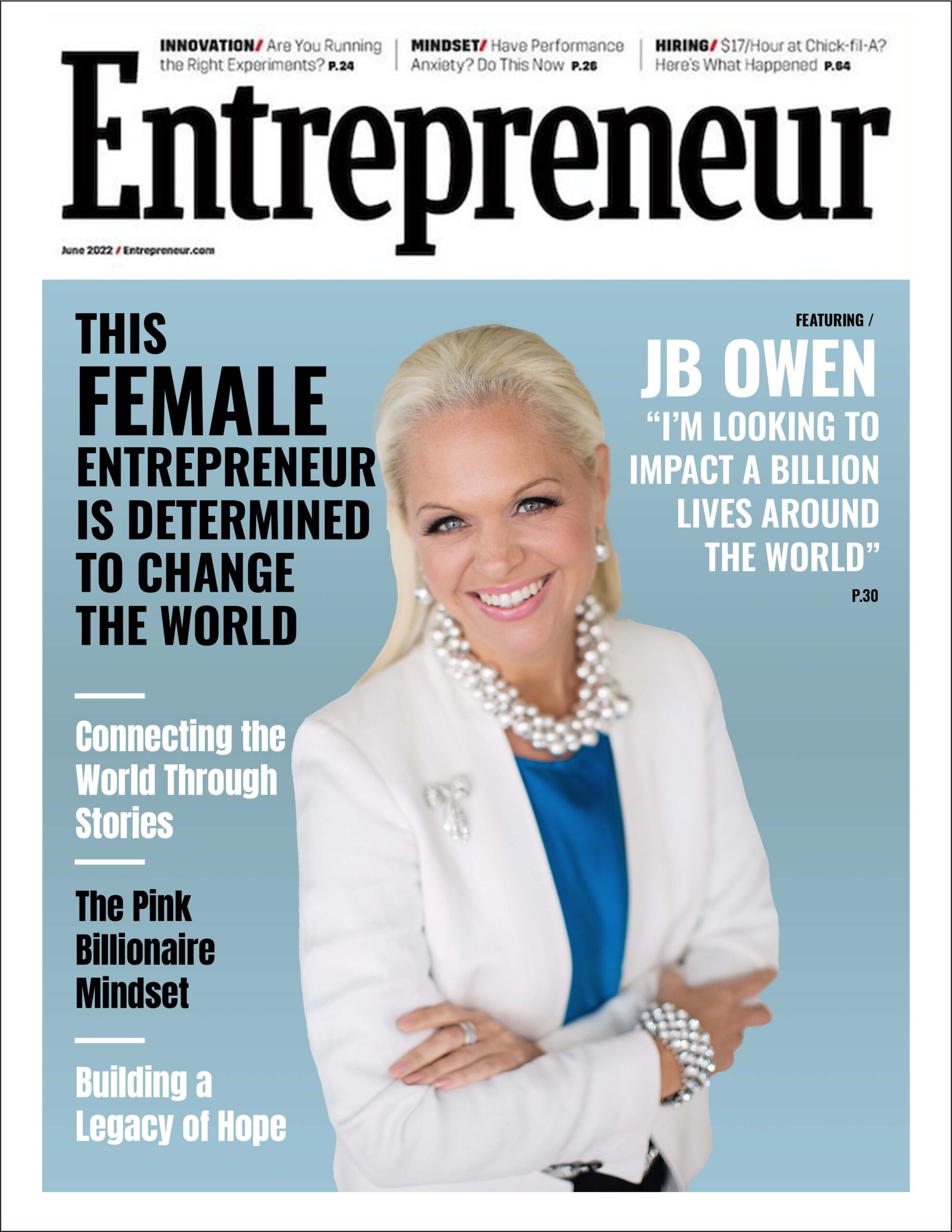 Meet JB Owen, the Pink Billionaire Looking to Impact A Billion Lives Around the World

JB Owen is a seasoned entrepreneur who is the founder and CEO of Ignite Publishing™, Ignite Moments Media, JBO Global Inc, Lotus Liners™ and travels internationally as a motivational speaker, teacher, and mentor. In addition to her myriad of business dealings, she is also a 19-time International Best-Selling author with the goal of igniting a global change by connecting the world through stories.

JB Owen has always been an entrepreneur. Her first business was selling Kool-Aid at the age of seven. By age nine, she had started her second venture. “I sold handmade necklaces at a local tavern to couples passing by. I loved to see the smile that my creative work could bring” As she grew older, she would continue to feed her entrepreneurial spirit. Over the next years she would start a nail shop, a clothing company, a eco-friendly feminine hygiene company and several other endeavors. While several of these businesses are still running and quite successful, one of her biggest endeavors is Ignite Publishing. She was inspired to start the company after experiencing the struggle of publishing her first book, in 2003. The process was difficult and she wanted to help others to have an easier experience. Ignite Publishing is a full service publishing company, but To JB Owen, it is so much more. “We are a transformational haven. We look to transform people. We transform through storytelling. When you work with us, we work through self-doubt and limiting beliefs to help you share your story, build your business, and ultimately, find freedom..” With over 700 published authors and several bestsellers from 47 countries around the world, Ignite Publishing is certainly transforming lives.

While it is easy to get caught up in the accolades of her businesses, JB Owen’s story is much deeper. When she first started in business, she found herself trying to change who she was to find success. Since she was a young girl selling necklaces, it had always been about making an impact on the people she serves. Whether it was a smile of appreciation for a beautiful necklace, a hug of thanks for an inspirational word, or tears of joy because of a life altering story, she cared about making a difference on the world around her. The problem is as her vision grew, she felt the need to change. “Working in a male dominated industry, I realized my personal business paradigm needed to evolve . Business tended to be more transactional and I thought I had to change that.” During that time, she found herself succeeding at business, but felt that she was missing the power and passion that made her enjoy being an entrepreneur. “To me, business is about serving people and finding solutions to problems, not just making money.” After several years of struggling to find her identity, she committed to going all in on creating business with the feminine and relational style that she loved. Her commitment to being “fearless fabulous, and femenine” has led her on an amazing journey. It wouldn’t be easy and she even had to walk away from certain business deals because her partners were pushing her change her values. Her resilience, however, was worth it. Now, all of her businesses operate at a global level, she has built a massive network of like-minded individuals and she has coached thousands around the world to Ignite their life and live for a greater purpose.

For the last decade, JB has been on a mission to become a billionaire. “I’m not a billionaire financially yet, but I have a billionaire consciousness. How can I affect a billion lives, make a billion people impact , and do something bigger than me?” That has been her driving factor and has led her to ask questions like, how can I ignite the world, and how can I create something that leaves a legacy for others. For her the answer is simple: find a way to enable others to share their story and build a common connection with people around the globe. Everything that she is doing now is based on that premise. She has partnered with real estate moguls Elena Cardone, Ryan Serhant, Don Hobbs, and Bryce McKinley to write their stories in a book where the proceeds will build homes and schools in Cambodia and Indonesia. She has created Igniteapedia™ as a platform for people around the world to share and connect their stories. Currently she is producing Ignite Humanity™, a documentary about powerful Ignite Moments™ that have transformed people’s lives, and will film that while with her husband while cycling on her tandem bike across Canada in an effort to share the amazing stories of individuals that she met along the way. Her goal is simple, to make an impact on the world. “My goal is touch a billion lives with a billion words, to create seven billion ignite moments that change the lives of people forever.”

JB Owen, now/also known as the Pink Billionaire™, is the perfect example of using business to make the world a better place. Although she has both, she is not motivated by money or fame, but rather by a desire to ignite the lives of others in an impactful and meaningful way. She wants to leave a legacy of hope for others to follow. “Go after your dreams and know that there is such a thing as no. When someone says “no”, it means, there’s a “new option” or “next opportunity” out there that is better for you.”

If you are looking to learn more about JB Owen and her businesses, you can visit her on her page Home – JB Owen or find out about how you can write your story here. You can also follow her on her Instagram page.