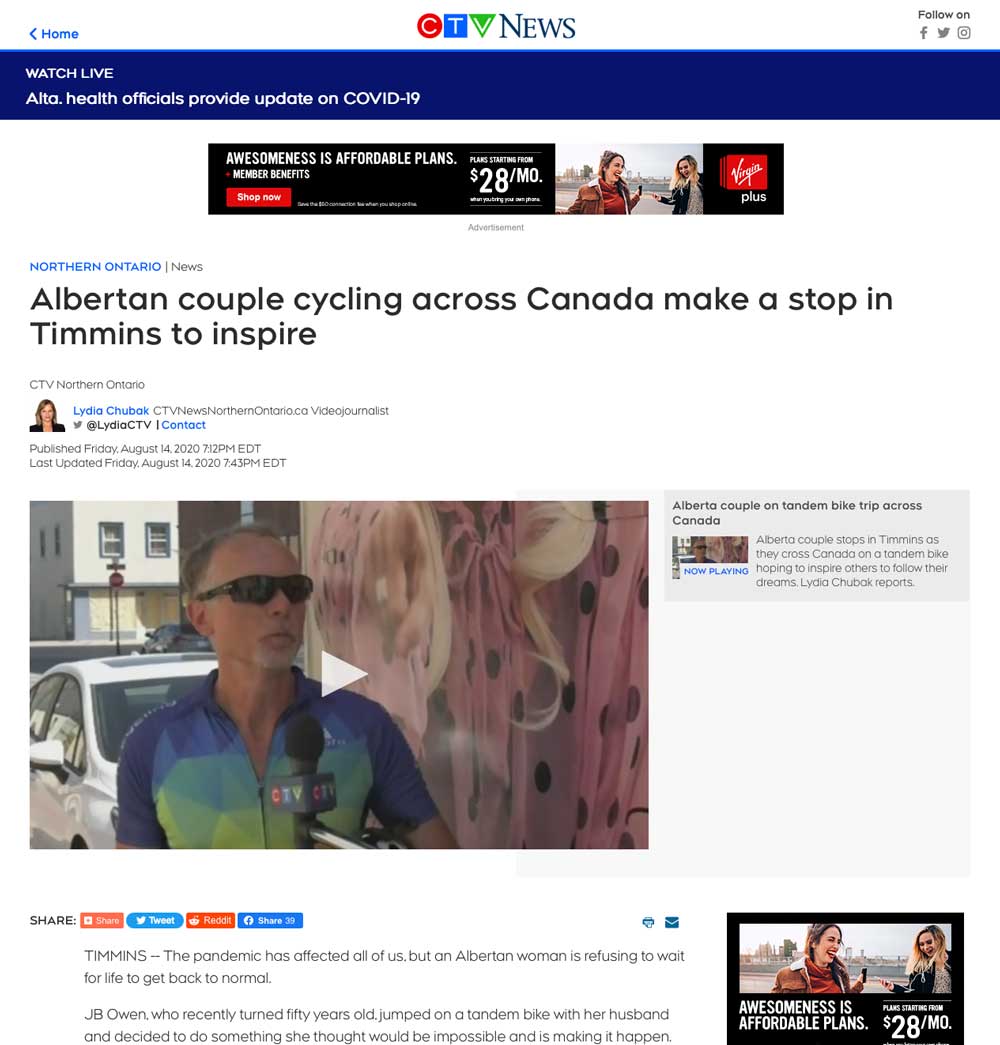 TIMMINS — The pandemic has affected all of us, but an Albertan woman is refusing to wait for life to get back to normal.

JB Owen, who recently turned fifty years old, jumped on a tandem bike with her husband and decided to do something she thought would be impossible and is making it happen.

Like many of us, JB Owen did her time on the couch this spring, watching COVID-19 news unfold on television and bingeing on Netflix.

Now she wants to have a show of her own. So, along with her husband, the two are cycling across the country, from Alberta to Nova Scotia.

She’s hit the road sharing her message of positivity, hoping to inspire others.  While on her journey, she wants to hear the dreams of Canadians and then she’s planning to share their stories in a television series.

“The world is changing so much that we need to change with it and awaken to what is available to us,” said JB Owen, founder of Ignite You, which has the goal of empowering its members.  “I thought this is the time to go after it and if a fifty- year old woman can cycle across Canada and show people she can just get up and do it and not knowing the how, but just doing it, ending up in Timmins or ending up in all these beautiful cities across Canada meeting amazing Canadians, anyone can go after their dream.”

Owen will be the first to tell you that she’s not an athlete and the tandem bicycle she and her husband are riding was in their home’s basement not getting much use.

She described her husband as the more active one in their relationship and said he was thrilled with her suggestion to travel the country.

“You get to that point where it’s like you know what have I done with my life,” said Peter Giesin, Owen’s husband.  “What else can I do? I’m not getting older, I’m actually getting younger.  Fifty is just a number to me and I can still do this.”

Owen also has her daughters and nutrition coach in tow.

“I am enjoying it a lot,” said Lydia Sacallis, Owen’s daughter. “I like to see all the people’s faces and seeing all the amazing places we go and just exploring the whole of Canada.”

“She is continuing her businesses plus adding a six and seven and sometimes eight hours a day on to cycling and to me it’s really showing what really is possible,” said Laurie Bartley.

Next stop for the group will be in Quebec–they ride about one-hundred and fifty kilometres a day.  The goal is to track five-thousand kilometres by the time they’re done in early September.